Includes 24-page booklet of photos, essays by Grammy Award-winning author Ashley Kahn and Resonance producer  Zev Feldman, plus interviews and statements by all the musicians

Recorded on June 22, 2007 at the legendary Clinton Recording Studios in NYC for BBC Radio 3’s program Jazz on 3, a Somethin’ Else Production Commemorating the 50th Anniversary of Coltranes Passing on July 17, 1967

Los Angeles, April 10, 2017 – ResonanceRecords is proud to announce the June 16th, 2017 release of Dave Liebman / Joe Lovano – Compassion: The Music of John Coltrane featuring pianist Phil Markowitz, bassist Ron McClure and drummer Billy Hart. Recorded a decade ago at the legendary Clinton Recording Studios in NYC for the BBC Radio 3 show Jazz on 3, produced by Somethin’ Else, the newly revealed session commemorates the semicentennial of Coltrane’s passing on July 17, 1967 with a seven-tune repertoire that covers each significant creative stage of Coltrane’s recorded legacy. Compassion is Resonance’s follow-up release to the acclaimed John Coltrane recording Offering: Live at Temple University from 2014, which featured Grammy Award- winning liner notes by Ashley Kahn.

It was in late June 2007 that NEA Jazz Master DaveLiebman received a call from Robert Abel, the producer of BBC’s popular radio program “Something Else.” Noting that July 17, 2007 marked the 40th anniversary of John Coltrane’s passing, Robert asked if he could bring in Saxophone Summit, Liebman’s outfit co-led with Grammy Award-winner Joe Lovano and Ravi Coltrane, to record an all-Coltrane program for the show. With the recording date just a few weeks away, Liebman managed to assemble regular members Lovano, Phil Markowitz, andBilly Hart along with Ron McClure as a substitute for the unavailable Cecil McBee. Recorded on June 22, 2007, almost forty years to the day after John Coltrane’s death, the quintet laid down 50+ fascinating minutes of music that showcases the breadth of John Coltrane relatively short but momentous musical legacy. Now a decade later, Resonance is proud to bring the recording to light. 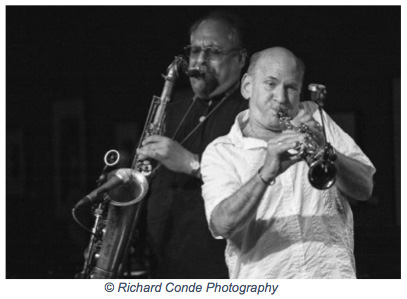 To commemorate Coltrane’s semicentennial on Resonance, there are arguably no other musicians better equipped for the job. The influence of John Coltrane on each member of the quintet can not be overstated; as Billy Hart says in the liner notes, “we’re just all unbelievable Coltrane fans.” He estimates that between the five of them, the study of Coltrane’s music has amounted to over 200 years

To celebrate the Coltrane anniversary, Liebman and Lovano decided that for this particular session they would broaden their scope to include music from all of Coltrane’s musical periods, thus producing a wide-ranging exploration that showcases six distinctive phases of his legacy. “Each period represents such a different outlook and concept that it’s incredible to imagine that one man accomplished all of this in such a short period,” says Liebman in the Compassion liner notes.

Compassion opens with “Locomotion,” one of Coltrane’s many compositional twists on the blues that first made an appearance on Blue Train (Coltrane’s only Blue Note recording) in 1958. “Locomotion” not only sets the stage for Compassion, but also served as an integral jumping off point in Coltrane’s musical development. As Lovano states in the liner notes, many of the intervals heard on “Locomotion” can be found in later Coltrane works – the main theme of A Love Supreme being just one example.

Compassion moves forward with a ballad medley that includes the harmonically rich “Central Park West,” featuring Lovano and ” Dear Lord,” which Liebman has referred to as “one of the most amazing compositions in the world.”

The inclusion of “Olé” signifies Coltrane’s well-documented interest in world music. A modal excursion with a Spanish tinged melody (borrowed heavily from the Spanish folk song “El Vito”), ” Olé” served as a precursor to Trane’s later explorations of other cultures (tunes such as “India,” “Dakur” and “Brasilia” come to mind).

Named for Reverend Martin Luther King Jr., “Reverend King” is a completely diatonic study in free time that features a rare appearance of Liebman on flute, followed by “Equinox,” which, like the opening track, is another version of the blues. The album then comes to a close with “Compassion,” from which the recording gets its namesake, brings us into Trane’s late period (1965-1967) with the second movement of his Meditations suite. “Subsequent song titles point toward Trane’s intense spiritual journey of this period – “Amen,” “To Be” and many more – all emphasizing the constant group interaction with little steady pulse or direct harmonic progressions,” says Liebman.

Available on June 16, 2017 as a Deluxe CD and digital format, the CD package includes an exquisite digipak and 24-page liner note booklet that includes photos by Chuck Stewart, Richard Conde, John Abbott, Andrew Lepley, Vincent Soyez and more; exclusive interviews and statements by Liebman, Lovano, Markowitz, McClure, and Hart, and essays by Resonance producer Zev Feldman and Ashley Kahn. “For an archival production, this might be the most recent recording Resonance has released to date, but we didn’t want to treat it any differently than our previous efforts,” says Executive Producer Zev Feldman. “I can think of no closer and devoted adherents to the music and legacy of Coltrane than Dave Liebman, Joe Lovano and this band.” Feldman adds that within the booklet one can find a wealth of knowledge from each musician as they shed light on the influence Trane had on them and how his music still holds such influence fifty years since his passing.

Says Billy Hart in closing: “I just think the world is a better place when you hear Coltrane’s music.”