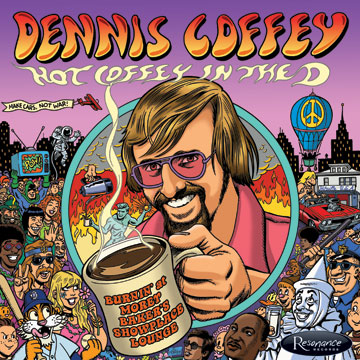 In the late ’60s, Dennis Coffey was a fixture in the fertile Detroit soul recording studio scene, where he helped shape the sound of countless hits for Detroit’s indie soul labels Golden World, Ric-Tic, Kelmac and Revilot, among others. Jack Montgomerys “Dearly Beloved,” The Reflections’ “Just Like Romeo and Juliet” and Darrell Banks’s “Open the Door to Your Heart” are just a few of the Northern Soul classics of that era that Coffey played on. At the same time, organist Lyman Woodard was the musical director for Martha Reeves and The Vandellas (Heat Wave) and Melvin Davis was busy cutting 45s of his own as a vocalist on the Groovesville, Fortune and Mala labels and landing a number regional hits including This Love Was Meant To Be/Save It (Never Too Late).

As Coffey’s renown as a top funk studio guitarist grew among the movers and shakers of the Detroit music scene, on the recommendation of legendary Motown bass player James Jamerson, producer Norman Whitfield recruited Coffey to play on records he was producing for Motown. Thus Coffey became established as a Funk Brother, a member of one of the world’s preeminent studio ensembles, which formed the backbone of countless Motown hit records and which was the subject of the celebrated GRAMMY® Award-winning feature-length documentary film, Standing in the Shadows of Motown (2002), in which Coffey is featured.

On Norman Whitfield’s productions for Motown, Coffey contributed to the evolving soul and funk sound coming out of Detroit by introducing guitar innovations like fuzz-tone distortion, Echoplex tape delay and wah-wah, previously the exclusive province of rock and roll players. This new style developed by Coffey can be heard on such mega-hits as the Temptations’ “Ball of Confusion (That’s What the World Is Today),” Edwin Starr’s “War,” and the Supremes’ “Someday We’ll be Together,” among many others. Coffey’s sound was something new and different and lent a modern feel to all the records he played on. Eventually, the demand for Coffey’s magic touch led to appearances on recordings by Quincy Jones, Barbra Streisand, Michael Jackson, Stevie Wonder and many others.

In addition to the virtuosity he imparted on other artists’ records, Coffey, along with his producing partner, Mike Theodore (co-producer with Coffey of the original recordings that make up this album), also produced recordings for a number of successful artists, as well as hit projects of their own. The iconic music executive Clarence Avant engaged Coffey and Theodore, through their production company Theo-Coff, to produce sessions, create arrangements and write songs for projects he released on his labels, Maverick/Venture and Sussex Records.

As producers, writers and talent scouts, Coffey and Theodore looked beyond soul and funk and ventured into new stylistic areas: rock, pop, folk and Latin. Coffey and Theodore discovered and produced albums by Sixto Rodriguez, the subject of the Oscar®-winning documentary, Searching for Sugar Man (2012). They had a million seller rock hit, “Nice to be With You” by the band Gallery and Coffey had his own million-seller instrumental funk hit “Scorpio,” which Theodore produced.

Coffey may have been toiling in the studios making classic funk records during the daylight hours, but by night, he and fellow Detroit soul and studio funk masters organist Lyman Woodard and drummer Melvin Davis were doing their own thing holding forth in local Detroit clubs as a jazz/funk ensemble billed as the Lyman Woodard Trio, fronted by Coffey’s distinctive guitar playing and arrangements. Their first gigs were in 1966 at a club called the Frolic Show Bar. In 1967, the trio left the Frolic and began an extended tenure at Morey Baker’s Showplace Lounge, where this set was recorded.

Melvin Davis says about Woodard, Lyman Woodard was probably one of the premier organists to come out of the east coast actually. He was a very accomplished musician; he was a person that had a very extensive following in the city of Detroit.

At Morey Baker’s, the trio played to a loyal following of discerning listeners who came every night just to listen to them play, rather than simply to dance. Therefore, it was important for the trio to maintain a distinct and compelling musical identity that evolved over time. They couldn’t just revisit the same material over and over and expect to hold onto their audience. Coffey says, We played there once a week and always packed the house. Much of our audience was middle to upper class folks who were judges, attorneys, businessmen and women who just loved listening to our brand of funk, jazz, rock and soul. I even hooked up a strobe light to the stage and would hit the switch that shut off the main lights. The strobe would go off while we’d jam on stage. It blew their minds!”

Coffey was always on the lookout for new and interesting repertoire and he would constantly bring in new music from different genres, having worked out all the musical arrangements in advance, as is evidenced by the repertoire on this album, which includes covers of soul classics such as “Casanova (Your Playing Days Are Over)” that Coffey played on the original Ruby Andrews studio version of; pop hits of the day such as the rousing version of Jimmy Webbs “By the Time I Get to Phoenix” treated in Coffey’s signature style; a smoldering version of the Burt Bacharach classic The Look of Love made popular by Dusty Springfield in 1967; a faithful adaptation of the Herbie Hancock classic Maiden Voyage; as well as two Coffey originals  the opening distortion-laden funk opus “Fuzz and the infectious and grooving The Big D.

The music on this album, Hot Coffey in the D: Burnin’ At Morey Baker’s Showplace Lounge, represents the trio in a raw and unfiltered display of their prodigious musical gifts. Indeed the recordings that make up this album served as the springboard for Dennis Coffey and Mike Theodore to be picked up by Clarence Avant on his own Sussex Records label, effectively launching their producing career in earnest. Another springboard was the seminal soul-funk instrumental album, Hair and Thangs, which was released on the Maverick label (distributed by Venture Records) in 1969 under Denniss name featuring both Lyman Woodard and Melvin Davis, and included a psychedelic version of the Isley Brothers hit Its Your Thing.

The release of this unique album is the direct result of the long friendship between Resonance producer Zev Feldman and the respected music journalist Kevin Goins, recognized expert on the Detroit music scene. They have been colleagues and friends for years dating back to Goins’s days in retail at the HMV store in New York in the ’90s when Feldman was rising in the ranks of the PolyGram organization. In early 2016, Goins learned from Coffey that these performances at Morey Baker’s had been recorded using studio quality gear and immediately called Feldman to alert him to the availability of this previously unheard session. Feldman recalls, I was so excited when Kevin first told me about the existence of these tapes. Right off the bat I was intrigued and felt compelled to release these recordings and tell the story of Dennis Coffey, who is to me one of the unsung heroes of guitar.

To Feldman, Dennis Coffey was a fascinating figure and an essential member of the guitar pantheon of popular music. Already aware of Coffey’s stellar history, it impressed Feldman that Coffey’s career as a guitarist/producer/arranger and artist spanned a myriad of styles and that he had a distinctive guitar sound that influenced so many guitarists of the day and many who followed. In 2011, the Fuel 2000 label released Absolutely The Best of Dennis Coffey, a collection of all of Denniss 1970s output on Sussex, and Feldman handled the marketing of the album. This experience solidified Feldman’s conviction that this music deserved to be heard; that there was an audience for this music, indeed a loyal audience that would be thrilled that this previously unknown music would be available to them. In my time working as the SVP of Sales and Marketing at Fuel 2000 Records, we released many of the masters from Clarence Avants catalog of albums. I became a big fan of Dennis and Mike Theodore during that time and knew the importance of their legacy and Dennis’s artistry.

Once again, consistent with its mission to honor the traditions of great American music in all its glory, Resonance Records has pulled out all the stops in creating this release. The deluxe CD & LP packages feature stunning original cover art by acclaimed cartoonist and Metro Detroit native Bill Morrison, who was one of the original illustrators on The Simpsons, art director of Futurama and one of the co-founders of Bongo Comics with Matt Groening. Feldman was searching for a particular vibe for this project that harkened back to the feeling he would get gazing at psychedelic 60s LP covers like Sgt. Peppers and reading Mad magazine. We struck out trying to get Robert Crumb and Al Jaffee, Feldman explains, so our associate producer Zak Shelby-Szyszko suggested we look into artists that have Detroit roots. When he sent me Bill Morrisons work, I knew right away he was the guy. And working with him was such a treat. Wed provide buzzwords about the characters, look and vibe we were going for and he delivered this masterpiece.