The accompanying 28-page book includes essays by producers Feldman and Barkan, journalist Ted Panken, a tribute by Steve Getz, interviews with Brackeen and Hart and statements from saxophonists Branford Marsalis and Joshua Redman. The album cover is beautifully designed by the acclaimed Japanese artist Takao Fujioka.

Ted Panken describes Moments in Time as capturing the artists on this recording as a “unit of thirty-something masters-in-the-making.” Keystone’s Barkan recalls: “Stan explained to me quite a few times backstage at Keystone Korner that ‘I have never felt as free and as totally supported as I do with this band with Joanne Brackeen, Clint Houston, and Billy Hart. They are happy and free to go with me wherever I go . . .'” Barkan relates that Getz frequently told him that he felt the most comfortable at the famed San Francisco club, more than he did at any other club.

Brackeen talks about playing with Getz in her interview with Feldman: “I think that it kind of really also displays the quartet at its best, which we rapidly became and stayed. And he had to be really daring to hire us. He already had his thing. He was already famous. He didn’t have to have this band. And this band was crazy! I mean, we would do anything and everything we possibly could. We weren’t just there as accompaniments . . . And then you hear how he played on it, it’s so lyrical. He doesn’t play one note that he doesn’t mean. At any time. That’s the one thing I guess that I would say about him that was so unique to me. And he also talked that way, when he was speaking.”

In his contribution to the album package for Moments in Time, saxophonist Joshua Redman pays homage to Getz: “His virtuosity  he could play any tune in any key at any tempo, with command and control and a sense of relaxation.” And he further celebrates Getz’s”. . . incredible storytelling ability  the natural, organic logic in the flow of his phrases and ideas.” Resonance Records is pleased to unearth these notable historic recordings of Stan Getz/João Gilberto and the Stan Getz Quartet and to share them now with the public. 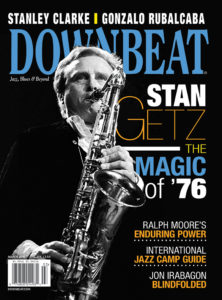