Resonance Records is Proud to Present 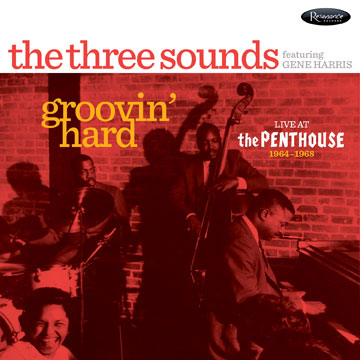 Los Angeles, CA – Resonance Records is proud to announce the release of Groovin’ Hard: Live at the Penthouse 1964 – 1968, a soulful collection of never-before-heard live recordings made over the course of five years during four separate engagements by the legendary Three Sounds featuring Gene Harris at Seattle’s long-time local treasure, Charles Puzzo, Sr.’s now late, lamented jazz club, the Penthouse. This album stands shoulder-to-shoulder with the best titles in the Three Sounds’ illustrious and extensive recorded catalog.

In addition to the Three Sounds’ own immensely successful albums recorded over the course of their 15 years together, Harris and his mates also collaborated on recordings with many of the foremost figures in jazz of the era such as Lester Young, Sonny Stitt, Stanley Turrentine, Johnny Griffin, Anita O’Day, Lou Donaldson and others. The Three Sounds collective recorded catalogue occupies an important place in the history of recorded jazz.

As a jazz pianist, Gene Harris was not only popular with fans, he was an important influence on a generation of pianists who followed him, such as Monty Alexander, Benny Green and many others. He had monumental technique, but that technique was always put in the service of deep feeling and groove. Monty Alexander notes, His touch on the piano was crystal clear, immediately bringing up the feeling of blues as well as that cross between church and blues. He was greasy! He brought up soulful emotions. Harris’s ever-present groove explains why the Three Sounds have remained relevant into the hip-hop era; a sample of their “Put On Train” was prominently featured in the Beastie Boys song, “What Comes Around” from their album, Paul’s Boutique.

Resonance Records’s own connection with the Three Sounds goes back to founder George Klabin’s childhood. Klabin recounts, “When I was 13 years old I fell in love with modern jazz. One of the very first jazz groups I discovered was the Three Sounds featuring pianist Gene Harris. I purchased many of their records and listened to them over and over, to the point where I could play them in my head. The Three Sounds were my introduction to bluesy, funky style jazz and I have cherished them and collected their recordings ever since.”

So it should come as no surprise that Resonance’s first forays into discovering and releasing archival recordings were two Gene Harris albums, live recordings made in London after Harris resumed his music career after a short-lived retirement: Live in London (2001) and Another Night in London (2006). Those two albums came to be after Gene Harris’s widow, Janie, knowing how much George Klabin loved the Three Sounds, sent copies of the tapes to Klabin.

Shortly after the release of Live in London, producers Zev Feldman and George Klabin began exploring in earnest the idea of going deeper into the pursuit of searching out and releasing previously unheard archival material by top jazz artists. Feldman says Its been so exciting working on these projects with George over the years, and hes certainly made me an even bigger Gene Harris fan than I already was! Whats interesting is that this was actually one of the very first projects we talked about when we started on the journey of releasing archival material, and its taken all these years to bring it to fruition, which is very fulfilling.

In the course of this project Klabin met and befriended Jim Wilke, the Seattle-based jazz radio personality, producer and engineer. Wilke had amassed a large library of tapes by top jazz artists in live performance at the Penthouse during the 60s, recorded during live broadcasts of his KING-FM radio show, Jazz From The Penthouse. Fifty years later Wilke is still active in jazz radio and live recording on location, and estimates hes recorded and produced well over a thousand recordings at clubs, concerts and festivals. When Klabin learned of the existence of this extraordinary Penthouse library, given his affinity for the Three Sounds, his attention was immediately drawn to the several recordings of the group preserved for posterity by Wilke. Klabin determined that the first title Resonance would release from this archive would be this album Groovin’ Hard: Live at the Penthouse 1964  1968.

The material on this album  hand-picked by George Klabin  is made up of jazz standards: (“Bluesette,” “The Night Has a Thousand Eyes” and “Yours Is My Heart Alone”); soulful treatments of popular tunes of the day (“The Shadow of Your Smile,” “Girl Talk” and the theme from “Caesar and Cleopatra”); and the soulful originals, “Blue Genes”; “Rat Down Front” and “The Boogaloo.” The repertoire is rounded out by Ray Brown’s rousing jazz waltz, “A.M. Blues.” Four of the compositions in the album’s repertoire have never been released on any other Three Sounds’ album: “The Shadow of Your Smile,” “Rat Down Front,” “Bluesette” and “The Boogaloo.”

Gene Harris was a guy that brought such feeling and emotion to the piano, Feldman says. He had a groove, and he played for the people. Its really hard not to enjoy what hes doing. Theres something very special about him and these recordings illustrate an important part of his legacy.

Resonance is proud to be able to bring this remarkable previously unknown recording to the public. We are particularly pleased to have been able to do so with friendship and support of the Puzzo family and Jim Wilke.

Once again, consistent with its mission to honor the traditions of great American music, Resonance Records has pulled out all the stops in creating this release. The album package includes over 51 minutes of music, along with a 28-page book, and is presented in a beautifully designed digipak by Burton Yount, with rare photos, as well as essays by Resonance producers Zev Feldman and George Klabin, jazz radio personality and recording engineer Jim Wilke, who recorded all of the material on the album, and noted author and jazz journalist, Ted Panken. The LP version is presented in a deluxe, hand-numbered, limited-edition pressing of 1500 worldwide on 180-gram black vinyl manufactured at Record Technology, Inc. (RTI), and mastered by the legendary Bernie Grundman at Bernie Grundman Mastering Studios in Hollywood, California.

Resonance Records  a multi-GRAMMY® Award-winning label (most recently for John Coltranes Offering: Live at Temple University for “Best Album Notes”)  prides itself in creating beautifully designed, informative packaging to accompany previously unreleased recordings by the jazz icons who grace Resonance’s catalog. Such is the case with The Three Sounds Featuring Gene Harris/Groovin’ Hard: Live at the Penthouse 1964  1968. A special limited edition vinyl release exclusive for Record Store Day’s Black Friday event will be issued on November 25, 2016, followed two weeks later on January 13, 2017 with the release of the album on CD and digital formats.

No news at this time