Los Angeles – The award-winning independent jazz label Resonance Records will unearth another hitherto unheard gem for Record Store Day’s Black Friday event on Nov. 27, with the release of the two-LP recording by master pianist Monty Alexander, Love You Madly: Live at Bubba’s. The limited-edition vinyl package is mastered by Bernie Grundman and pressed at 33-1/3 rpm by RTI.

The 13-track, 92-minute release will make its first CD appearance as a two-disc package on Dec. 4. Booklets for both the LP and CD editions will include fresh interviews, newly commissioned essays, and photos by Jan Persson, Raymond Ross, and Brian McMillen. 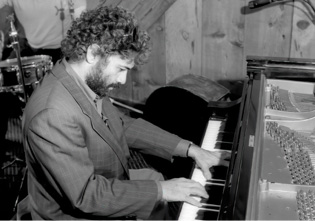 Drawn from Alexander’s personal collection, the vigorous, imaginative performances on Love You Madly were recorded at the titular Fort Lauderdale, FL, nightclub on Aug. 6, 1982. The recording engineer was the late Mack Emerman, legendary founder of Miami’s Criteria Recording Studios, the state-of-the-art facility where the Bee Gees, Eric Clapton, the Allman Brothers Band, and Aretha Franklin, among many others, had cut some of their biggest pop hits.

The Kingston, Jamaica-born keyboardist had lived in Miami since his family moved there in 1961, and had known Emerman, a jazz buff who had played trumpet in his alma mater Duke University’s big band, for many years.

Alexander recalls in a new interview with Resonance co-president and “Jazz Detective” Zev Feldman, “Mack just had this idea, ‘Hey, can I come and record you? I’ll bring the truck.’ He already had a remote truck [unit]. So he brought the truck and he put the mic on the bass and the drums, and the whole thing, and, son of a gun, this tape, which he gave to me, was all a gift.”

In his overview essay, jazz historian Willard Jenkins says of the resultant recording, “For this date at Bubba’s, Monty Alexander drew up neatly balanced set lists that touched upon several facets of his expansive bag, including standards, ballads, blues, island perspectives and southern exposures ranging as far south as Brazil….[Love You Madly] provides a wonderful survey of the leader’s gifts and his enormous rhythmic palette on the wings of his consummate piano artistry.”

In an open letter to the pianist in the package, Klabin says, “The title Love You Madly says how I feel about your musical soul. To me you are one of the top five modern jazz pianists ever to play the instrument…. You have kept the great tradition of modern jazz alive —the ability to swing!”

Feldman adds in his own introductory piece, “This recording is really important, and documents an underrepresented chapter of Monty’s recording output. It’s Monty with a great band, and the recording has fantastic fidelity. They are incredibly strong performances, with high energy that epitomize Monty at his very best.”

Alexander’s accompanists on the Fort Lauderdale date offer warm new recollections of their time working with the pianist.

Bassist Berner says, “Playing with Monty every night was a party. Every night was completely on. I can’t remember it not being happening. I remember this gig because that band came together that week…. It was effortless. Now that I hear the recordings back, it confirms it for me. It was flowing. It was like nothing was between us and the music, as it were.”

“When I was 17,” drummer Jackson says, “Monty gave me a golden opportunity to learn to accompany the artistry of a true maestro. When tough love was needed, he knew what to do, but he was a loving big brother, musically speaking. He inspired me to treat the music with respect, and he was patient with me because I was a young little dude just out of high school.”

Says percussionist Thomas, “I think he is magical at times, on the piano. He plays from his soul. Every single note comes out of his soul. Never get tired of listening to him. Never get tired of playing with him. Over 40 years playing together, and every time we’d go on stage it’s like the first time.”

Several top-flight jazz pianists offer their own estimations of Alexander’s style and contributions to the genre in new interviews and essays.

NEA Jazz Master Kenny Barron enthuses, “His playing has this kind of sparkle. It’s definitely music to make you feel good, and it’s geared towards that. It’s happy, happy and snappy. And I mean, those are corny, corny adjectives, I know. But that’s the feeling. I get the same feeling from listening to Wynton Kelly play, just joyful. Joyful, that’s a better word. His music is always very, very joyful.”

“The soul and humanity that Monty breathes into each song he plays is a wonder,” Benny Green says. “His depth of expressive soul and his nature of musical story telling is in its own league of piano trio royalty right alongside his inspirational heroes Erroll Garner, Oscar Peterson and Ahmad Jamal.”

Echoing those remarks, Emmet Cohen says, “Monty teaches us that music (and more specifically jazz) comes from the soul; it’s learned through oral tradition and is a means to uplift anyone who will listen.”

Summoning up a gastronomic metaphor for the musical feast that is Love You Madly: Live at Bubba’s, Christian Sands says, “Listening to Monty is like eating a great meal made by a master chef. He musically cooks with the grits and gravy of the blues, adds the smokiness of NYC swing, all while simmering in the rich island flavors of his Jamaican roots. He satisfies all of the senses and leaves you wanting to hear more.”