LOS ANGELES, Calif.  Resonance Records proudly announces the release of Jaco Pastorius: Truth, Liberty & Soul  Live in NYC: The Complete 1982 NPR Jazz Alive! Recording , a first-time release comprising more than 130 minutes of extraordinary, high-fidelity, ground-breaking music presented from beginning to end exactly as it happened at Avery Fisher Hall on June 27, 1982. This is the second historical release from NPR’s Jazz Alive! radio program, following 2016’s acclaimed Sarah Vaughan Live at Rosy’s, which captured “the Divine One” in New Orleans on May 31, 1978. The brightest star in the electric bass firmament, Jaco Pastorius burst onto the national scene in 1976 with his audacious self-titled album on Columbia Records, featuring a lineup of top jazz musicians. With his extraordinary fretless electric bass playing as the centerpiece, Jaco Pastorius created an immediate sensation with the public and the media. Jaco was a revelation; no one in jazz had ever played electric bass that way before. In Jaco’s work with Weather Report and beyond, the self-described “greatest bass player in the world” (an assessment shared with virtually the entire music world) established a new identity and role for his instrument and became the torchbearer for a new way of playing both technically and conceptually. But behind it all was an ever-present R&B and Latin-influenced groove and a screaming rock-‘n’-roll attitude that he refined and incorporated into sophisticated jazz harmonic structures. His legacy as a bass innovator continues to this day, nearly thirty years after his death in 1987. In addition to his extraordinary virtuosity, Jaco was also developing into an accomplished and sophisticated composer and arranger and those talents that are gloriously on display on this album. Resonance is able to release this album thanks to the work of Tim Owens, producer of Jazz Alive!, a weekly syndicated NPR program that aired on public radio stations across the U.S. from 1977 to 1983. Jazz Alive!‘s mission was to record the best live jazz being performed around the country and present those recorded performances to the public over the air. In 2011, noted jazz producer and label executive Michael Cuscuna introduced Resonance’s Zev Feldman to Owens. When they met, Feldman saw a piece of paper with a list of tapes on it and at just quick a glance the words “Jaco Pastorius” leapt right off the page. Feldman loves Pastorius’s music; he regards Jaco as a hero. From the moment he noticed there was a recording of the Jaco Pastorius Kool Jazz Festival concert out there, he was determined that Resonance would release it. Now, more than six years later, after negotiations with all the many parties who held rights to the music and the recording  including NPR, Warner Music Group and the Jaco Pastorius estate  Feldmans dream is finally coming to fruition. And we at Resonance could not be more thrilled. 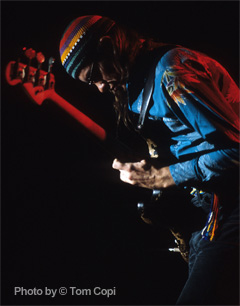 We were blessed to have the original recording engineer, multi Grammy award winner Paul Blakemore, on board to revisit and remix from the original 24-track tape reels  more than three decades after capturing it live at Avery Fisher Hall. And in addition to the exceptional sound quality, were elated to say the set includes more than 40 minutes of music that was not broadcast on Jazz Alive! at the time, therefore has never been available to the public, even in bootleg form. This is the complete concert, start-to-finish. Toward the end of 1980, Jaco began recording his second album as a leader, Word of Mouth, which was more oriented toward his own compositions than his debut album had been. The Word of Mouth album features several musicians who also appear on this album: Peter Erskine, Toots Thielemans, Don Alias, Othello Molineaux, Howard Johnson and John Clark, as well as showcasing two Pastorius compositions,“Three Views of a Secret” and “Liberty City.” By 1982 Jaco and Peter Erskine had left Weather Report, and the concert captured on this release represents Jaco with the New York version of his new Word of Mouth big band. The occasion was special for him because Word of Mouth often performed as a sextet with just the core members: Jaco, Peter Erskine on drums, Randy Brecker on trumpet, Bob Mintzer on tenor sax, Othello Molineaux on steel pans and Don Alias on percussion. On this occasion, Jaco and the core members were joined by a bevy of top-flight New York musicians who were also Jaco’s close friends: saxophonists Bob Stein, Lou Marini, Frank Wess, Howard Johnson and Randy Emerick; trumpet players Alan Rubin, Lew Soloff, Jon Faddis, Ron Tooley and Kenny Faulk; trombonists David Taylor, Jim Pugh and Wayne Andre; French hornists John Clark and Peter Gordon; tubist David Bargeron; plus the special guest soloist, harmonica icon Toots Thielemans. Peter Erskine, Jaco’s rhythm partner for the most productive years of Jaco’s career, expressed his view of the crucial importance of this release: “I think that this recording more than any other I’ve heard epitomizes the vision Jaco had for the Word of Mouth band. And that’s what’s great about it. I would dare say that theres no finer version of what Jacos musical vision was than this particular concert and recording.” The great bassist Victor Wooten assessed Resonance’s release of this album this way: “This is a rare find; like finding a never-before-seen Picasso or Van Gogh painting.” Resonance Records  a multi-Grammy Award winning label (most recently for John Coltrane’s Offering: Live at Temple University for “Best Album Notes”)  prides itself in creating beautifully designed, informative packaging to accompany previously unreleased recordings by the jazz icons who grace Resonances catalog. Such is the case with Jaco Pastorius: Truth, Liberty & Soul  Live In NYC: The Complete 1982 NPR Jazz Alive! Recording. Available as a limited-edition, 3-LP, 180-gram vinyl boxed set exclusively for Record Store Day (April 22, 2017), followed by the deluxe 2-CD and digital sets on May 26, 2017, this release includes more than 130 minutes of music. The CD edition includes a 100-pg book with photos by Tom Copi, Don Hunstein, Rene Perez and Donna Ranieri, and is presented in a 6-panel digi-pak beautifully designed by Burton Yount. The limited edition 3-LP boxed set contains all the same graphic materials and writings contained in a multi-page 12″x12″ insert.

“Bill Evans Live at Art D’Lugoff’s Top of the Gate” (Resonance) – a two-CD set that rivals Evans’s revered Village Vanguard recordings for Riverside in June ’61. The unearthed music is frighteningly vividlike being seated at a table on stage amid the musicians. -Wall Street Journal The long-ago sounds of these two live sets of the Bill Evans trio playing mostly standards, recorded in a long-gone Greenwich Village club, Top of The Gate (it was literally above the better-known Village Gate jazz club), are if not the holy grail, then a very gilded cup. -Stereophile Magazine Editors Pick  Recording of the Month! – July 012 issue “Now with the release of Live at the Art DLugoffs Top of the Gate, there is more of Bills inspiration for all of us to learn from and enjoy.” -Gary Burton “…These sessions will now be heard by generations of players and listeners whose lives will thereby be markedly enhanced.” -Nat Hentoff “…this recording…is a throwback to another era that only barely exists today. It was the 60’s…” -Eddie Gomez “It was the most incredible time in my life. My first two weeks with Bill Evans were about to begin at the Top of the Gate in Greenwich Village, NY.” -Marty Morell