Available on CD, Digital and Streaming on September 15, 2017 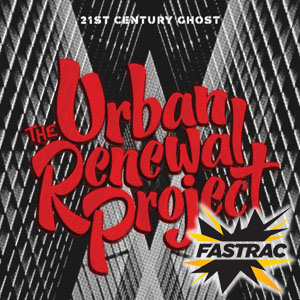 Los Angeles, August 2017 – Resonance Records is proud to announce the launch of its new label imprint Fastrac Records, which will focus on new releases from emerging and contemporary artists. Fastrac will debut with the release of The Urban Renewal Project – 21st Century Ghost, a genre-bending meditation on isolation in the era of hyperconnectivity. Featuring nine guest vocalists that run the gamut from legendary Bronx rap duo Camp Lo to California indie pop princess Gavin Turek, 21st Century Ghost is due out September 15, 2017 and a summer/fall tour will support the release.

The Urban Renewal Project is a dynamic young big band out of Los Angeles, playing an original mix of jazz, soul and hip-hop. Since 2010, the 15-piece ensemble has teamed up with singers and rappers to blend the hip-shaking grooves and deep pocket of today’s music with face-melting horn lines and fiery improvisation from big band jazz. In the past few years, their signature sound has blown away audiences from New York’s Rockwood Music Hall to the San Jose Jazz Summerfest and beyond.

Born from a high school talent show act assembled by saxophonist and bandleader R.W. Enoch, The Urban Renewal Project began in earnest when Enoch met rapper Elmer Demond in Los Angeles several years later. After experimenting with different musical approaches and configurations which can be heard on earlier releasesLocal Legend (2014) and Go Big or Go Home (2012), the two settled on their current set-up: a big band performing a mix of soul, hip hop, jazz and pop music with guest vocalists from each genre – every song incorporating the polish and drive of contemporary pop records with the vibrant energy of live ensemble performance.

The group’s pre-release singles have already garnered national press and radio attention, including spins on KCRW-Santa Monica, KPFK-Los Angeles and KPFT-Houston. HiphopDX described “Don’t Ask Y ft. Camp Lo” as “deep funk beats and powerful brass,” and BuzzbandsLA said “Hide ft. Elmer Demond” was “cool as the other side of the pillow.” In support of the release, they have lined up a string of summer West Coast performances, with stops in Los Angeles, Seattle, Portland, San Francisco, San Jose, Carson City and more to come.

This record marks the first time the band worked with producer Neil Wogensen, a member of indie folk-rock band Valley Queen, who was featured on an NPR Tiny Desk concert last July. Bandleader R.W. Enoch said of the experience “it was amazing to see how Neil transformed a good-sounding band into something really special on these recordings.”

In addition to Demond, guest vocalists on the album are Hugh Augustine, who is coming off two high-profile features in 2016 on Isaiah Rashad’s The Sun’s Tirade (2016/Top Dawg Entertainment) and the single “Nights On Replay” with Syd from The Internet; Amber Navran, who is also in the band Moonchild on the UK label Tru Thoughts; and Alex Nester, a cancer survivor who has performed with Santana and runs a cancer charity called #BurnItDown.

In 2016, the band was featured in a documentary film called Mighty Ground, which follows the life of a homeless songwriter, Ronald Collins, as he tries to kick a crack addiction and turn his life around to pursue his passion for music. The film was an official selection of the 2017 LA Film Festival and Collins occasionally performs as a special guest with the band at live shows.

Co-executive producer Zev Feldman (and EVP/GM of Resonance and Fastrac) says “I’m thrilled to be launching this new record label, Fastrac Records, with The Urban Renewal Project. I’ve been following this band for the past 8 years and could see that their passion and dedication to this music was genuine and was translating into more and more shows, and a bigger following. It was the perfect fit and the timing couldn’t be better. We’re really honored to be working together.”

No shows booked at the moment.