Los Angeles, August 2017 – Resonance Records is proud to announce the release of Just Friends: Live at the Village Vanguard, a spirited never-before-heard live recording by clarinetistEddie Daniels and pianist Roger Kellaway featuring bassist Buster Williams and drummer Al Foster. Recorded by Resonance Records founder George Klabin in the front row at the storied Village Vanguard in Greenwich Village, New York City in late 1988, Just Friends is a revelatory meeting of two jazz masters, with one of the best imaginable rhythm sections, deep in dialogue on a set including the venerable standard “Just Friends” and two original pieces each by Daniels and Kellaway.

Klabin received permission from the band to record on this Saturday night of their weeklong run at the Vanguard, and came prepared with a high-quality cassette recorder and a single Sony stereo microphone. “I just placed the mic on the table facing the band, hit ‘record’ and let it run. It was as simple as that,” Klabin recalls in his liner note essay. “The tape sat in my personal collection ever since I recorded it. Nearly three decades later, in 2016, I pulled it out and listened to it. Immediately I was transfixed again. I decided to send digital copies to Roger and Eddie for their enjoyment.” Discussions ensued. Klabin got the go-ahead from all four quartet members and began laying plans for this remarkable DIY recording to finally come to light. The album cover photo is by the legendary jazz photographer William Claxton, with interior images by Tom Copi and Richard Laird, all beautifully assembled into the CD package by longtime Resonance designer Burton Yount.

And yet, as John Murph observes in his liner notes, Just Friends is “Not only a fascinating musical snapshot of 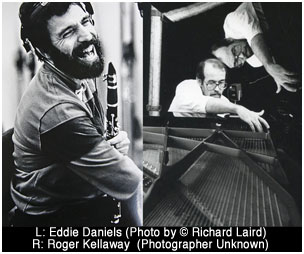 Daniels’ early years playing with Kellaway, it introduces the larger jazz world to rare compositions penned by the two.” Kellaway’s fiercely uptempo but strikingly multifaceted “The Spice Man” is something the pianist hasn’t revisited and doesn’t intend to (“I just don’t want to play that fast”). His “Some O’ This and Some O’ That” reveals a Thelonious Monk influence, perhaps Art Blakey as well, in its driving shuffle feel and dazzling solos. Daniels’ contributions, the gorgeous ballad “Reverie for a Rainy Day” and the Mozart-inspired “Wolfie’s Samba,” are also rarities, never again performed by the clarinetist.

Just Friends also offers a window into a particular period in jazz history, when Daniels was a “roving studio rat” on multiple reeds who had logged many hours on the Vanguard bandstand with the Thad Jones-Mel Lewis Orchestra. Williams, as noted in his booklet interview, had just begun working with Kenny Barron in the supergroup Sphere, as well as the Timeless All-Stars featuring Cedar Walton and others. Al Foster, still in the midst of his long Miles Davis association, was also playing with the likes of Joe Henderson, John Scofield and more. Kellaway, with sideman credits including Wes Montgomery, Oliver Nelson, Clark Terry, Sonny Rollins and Herbie Mann, was recording sporadically but always superbly as a leader, bolstering the case for himself as one of the most compelling if overlooked pianists in jazz. Just Friends adds to our understanding of this elusive but important figure.

Adding to the auspiciousness of Just Friends is the fact that Bill Evans’ Some Other Time: The Lost Concert from the Black Forest, a landmark Resonance release from 2016, won top honors for Historical Album of the Year in the annual DownBeat, JazzTimes and Jazz Journalists Association (JJA) critics polls. As Nate Chinen of WBGO.org remarked in a story this April about Resonance’s efforts tying in to the annual Record Store Day, the label has built a one-of-a-kind profile with its deluxe historical releases, including recent items by Wynton Kelly, Wes Montgomery, John Coltrane and Jaco Pastorius. “Each release is a gem,” wrote Chinen, and Just Friends certainly upholds that lofty standard.