Resonance – a division of the Rising Jazz Stars Foundation, a non-profit corporation created to discover the next jazz stars – has previously issued two widely acclaimed, never-before-heard albums by Evans’ ’68 unit. That combo recorded the pianist’s second Grammy Award-winning Verve album, Bill Evans at the Montreux Jazz Festival; recorded on June 15, 1968, it was the only contemporaneous album released from the lineup during its brief existence.

Unearthed by Resonance co-president Zev Feldman (a/k/a “the Jazz Detective”), Some Other Time: The Lost Session From the Black Forest (2016) was a two-LP/two-CD studio date, cut five days after the Evans-Gomez-DeJohnette trio’s Montreux appearance, which had sat unheard in the German vaults for 50 years. A second historic discovery, Another Time (2018), was recorded two days later by the Netherlands Radio Union in Hilversum.

These collections garnered praise in DownBeat and JazzTimes in the U.S., Jazzwise in the U.K., and the NPR Music Jazz Critics Poll; Some Other Time topped Billboard’s Jazz Albums chart.

Recordings by the Evans-Gomez-DeJohnette lineup are as prized as they are rare. DeJohnette was an especially simpatico accompanist for Evans, for he had been a pianist before taking up the drums. Despite their chemistry, the trio played together for a mere six months. During their stay at Scott’s, Miles Davis stopped in to check out the band, and the trumpeter swiftly recruited DeJohnette for his new group. By the end of 1968, Morell was hired by Evans as his replacement, and he drummed behind the pianist through 1974.

Distinguished British critic, author, broadcaster, and pianist Brian Priestley, who witnessed Evans’ ’68 trio in action, puts the London stand and Evans’ then-current repertoire in context in newly commissioned notes for the release. He writes that the performances’ “compelling, indeed at times overwhelming, musical quality is such as to impress this listener all over again.” 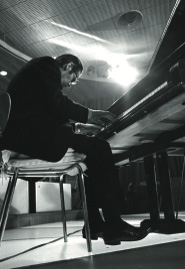 Live at Ronnie Scott’s also features a joint interview, conducted by Feldman, with DeJohnette and Grammy-winning pianist (and, in his early career, drummer) Chick Corea, who played with DeJohnette in Miles Davis’ storied late-‘60s lineups.

Recalling his short but memorable stint with Evans, DeJohnette says, “The music was at a really high creative height, and I’m glad I documented that, and the tape was good enough for Resonance to run with it…You really get a chance to hear Bill stretch.”

“Bill was a big hero for me and for all of our generation,” Corea says of Evans. “Bill was just like the generation just before us, and we all looked up to him with his recordings with [bassist] Scotty [La Faro] and [drummer] Paul [Motian].”

In his own interview with Feldman, Gomez says of the recording, “It’s enlightening to go back and relive moments that are ingrained in your memory in a totally different way; time just does that. Fifty, fifty-two years; that’s a half a century. That’s a long time. So going back and listening to it and reflecting on it and seeing the changes in all three of us from this perspective gives you a different view.”

Perhaps the most unexpected element of the package is an extensive interview with the great comic actor and jazz buff Chevy Chase. He encountered Evans’ music as an underage jazz club-goer and began a friendship with the pianist as a student at Bard College, where he played in a band with classmate Donald Fagen of Steely Dan.

He tells Feldman that Evans’ music was “the most lyrical jazz you could ever hear, in terms of jazz that wasn’t sung. It was just beautiful. And yet, very complex. Everybody I know tried to be Bill, but all you have to do is put a little video of Bill on or a record and say, ‘Try that.’ He really had a touch on the piano that he couldn’t match.”

Gracing the cover of both the LP and CD iterations of Live at Ronnie Scott’s is artwork drawn from a never-before-published, one-of-a-kind lithograph by the late, legendary artist/illustrator David Stone Martin, whose distinctive interpretations of jazzmen in action were featured on dozens of classic jazz LPs, notably including many for Norman Granz’s labels of the ‘40s and ‘50s.

Feldman writes, “I had one big decision to make: do we go all the way and recreate a jacket in the same manner of DSM’s classic covers of the 1940s and 1950s, even though our album isn’t from that era?  Or do we go a different, more modern route and simply incorporate DSM’s artwork into a more contemporary style image?  I thought long and hard about this.  Ultimately, I came to see it as an opportunity to recreate that special era, a nod to those classic 1940s and ‘50s Verve/Clef/Norgran album covers.”

Bill Evans Live at Ronnie Scott’s will be the fifth Resonance title to feature unreleased music by the pianist: 2014’s Live at Art D’Lugoff’s Top of the Gate was the label’s first Evans collection. Smile With Your Heart: The Best of Bill Evans on Resonance, a mid-priced compilation, was issued in 2020.