Wes Montgomery – In Paris: The Definitive ORTF Recording captures the jazz guitar legend in concert during his only tour of Europe on the night of March 27, 1965.

Los Angeles, CA [November 2017] – Resonance Records is proud to announce the first official release of Wes Montgomery – In Paris: The Definitive ORTF Recording which captures the jazz guitar legend in concert during his only tour of Europe on the night of March 27, 1965 at the Théâtre des Champs-Élysées in Paris, France. Considered perhaps the greatest live Wes Montgomery performance ever, In Paris is being released in partnership with the Institut national de l’audiovisuel (INA) with remastered high-resolution audio transferred directly from the original tapes, and will mark the first time the Montgomery Estate will be paid for this recording, which has been available as various bootlegs since the 1970s. This is also Resonance’s second album released in partnership with INA in a series of ORTF recordings, following 2016’s critically acclaimed Larry Young – In Paris: The ORTF Recordings. 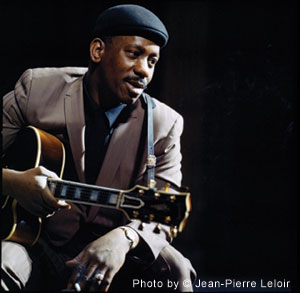 European audiences had eagerly wanted to see Wes Montgomery perform live, but his severe fear of flying had kept him in the states, where he played in mostly local clubs in and around Indianapolis. This 1965 European tour was the only overseas trip he would ever make, just after his forty-second birthday, and three years before his untimely death. According to Harold Mabern, this rhythm section was a relatively new group, having only played a handful of gigs prior to their European tour, but they were very tight and had a great time. “Most of the stuff was spur of the moment; that’s what made it fresh then, and it’s still fresh now. That’s why it sounds happy – because we were happy, and it was all about the music.”

Feldman returned to France in 2012 to explore the Office of French Radio and Television (ORTF) archives, which are overseen by the French National Audiovisual Institute (INA), and learned of countless recordings in their vaults documenting some of the greatest American jazz musicians who lived in – or visited – Paris in the 1960s, including Larry Young, Wes Montgomery and many others. “When we assessed what the ORTF archives had to offer, it was clear to us that the first never-before-released Larry Young material in nearly 40 years was a top priority. Then there was the legendary Wes Montgomery in Paris concert recording, which I knew had been only available as bootlegs for decades. In some ways, I think of Resonance as the house that Wes Montgomery and Bill Evans built, so we are deeply indebted to protecting those artist’s legacies and we do whatever we can to ensure that any newly discovered music from them be presented in the best possible light, and of course, legally with all parties being compensated appropriately.”

This 10-track recording, captured a mere three months before the classic Smokin’ at the Half Note (Verve 1965), starts off with Wes Montgomery’s original composition “Four on Six.” In the album notes, Vincent Pelote describes Wes’ playing as shining with a “fiery solo that establishes the routine that Montgomery follows throughout this concert: single notes, followed by octaves, then those amazing block chords.” Standing by him on the piano, Harold Mabern adds “crashing chords and Phineas Newborn-like runs up and down the keyboard.”

The set consists of many familiar tunes Wes had recorded before on his iconic Riverside studio sessions including “Jingles” and “‘Round Midnight” from The Wes Montgomery Trio in 1959, and “Twisted Blues”from So Much Guitar! in 1961, but at the 1,900 seat Théâtre des Champs-Élysées, we hear Wes stretch out like never before in front of a ravenous audience. Russell Malone commented in his liner note interview, “I thought I knew Wes, because I had listened to a lot of the stuff that he had done on Riverside, and some of the commercial outings. But when I heard him stretching out like that, I’m like, ‘this man is on some other stuff here!’ That Paris recording is so powerful…”

Harold Mabern’s original composition “To Wane,“ a tribute to the great saxophonist Wayne Shorter, will knock your socks off with the lightening speed soloing. Mabern noted that he lifted the melody from Shorter’s solo on “Alamode” from the 1961 Impulse! album, Art Blakey!!!!! Jazz Messengers!!!!!: “he started out with a very melodic, lyrical way of playing, and I took part of that and turned it into my song, and I called it ‘To Wane,’ meaning to wane like the moon.”

Throughout this concert bassist Arthur Harper anchors the solidly swinging rhythm section and the re-mastering of the original tapes on this first-time, legally issued release, allows the contribution of the bass to be properly heard for the very first time. Jimmy Lovelace, a longtime fixture at Smalls jazz club in New York City, tastefully propels the band from the drum chair.

As mentioned previously, bootleg issues of this concert have been available since the 1970s, and in all these years the Montgomery family has never received any payments whatsoever. In Paris: The Definitive ORTF Recording is the only official and definitive release of this recording and marks the first time the Montgomery Estate and other musicians on the recording or their estates will be compensated. Resonance is on a mission to combat this serious bootlegging problem by reclaiming and releasing official versions of important jazz recordings where all rights are cleared and all parties are compensated accordingly. Resonance EVP/GM and producer Zev Feldman says, “We are honored to have had the trust and support of the Montgomery Estate for the past seven years and it’s so gratifying to know that the family is finally being compensated for this recording after so many years of illegal copies on the market.” Previous bootleg issues of this concert have not only had inferior audio quality and packaging, but have also mislabeled several song titles including “The Girl Next Door,” “Jingles,” “To Wane,” and “Twisted Blues” (incorrectly titled “To Django,” “Mister Walker,” “To When” and “Wes’ Rhythm” respectively).

“For five decades, one of my father’s greatest live recordings has been available only by way of various bootleg releases from which my family has not received one dime. This is a tragedy. I’m so thankful that a record label like Resonance Records is around to stand up for what’s right and protect the intellectual property and legacy of musicians like my father and many others.” – Robert Montgomery (Son of Wes Montgomery and Representative of the Montgomery Estate)

“The Recording Academy is a fierce advocate for protecting creators and their intellectual property. The decades-long exploitation of recordings such as the live Wes Montgomery recording from Paris via bootleg releases is nothing short of a tragedy. We applaud organizations such as Resonance Records that seek to right the wrongs of the past and set a shining example of how to do justice to an artist’s legacy.” – The Recording Academy

“The Recording Industry Association of America® (RIAA) is a tireless proponent of protecting the rights of artists and their valuable intellectual property. The problem of illegal bootlegging – the distribution of unauthorized recording of live performances – has been a scourge on performers for decades, affecting artists of past and present – including icons such as Wes Montgomery and countless others. These unauthorized recordings rob performers of their ability to control their art, while the sale and distribution of those illegal recordings profits only the thieves – with nothing going to the creators. Today’s vast legitimate music marketplace gives consumers a superior alternative to the black market of bootlegging. We encourage fans to get their favorite tunes in ways that support and respect all music creators.” – Brad Buckles, EVP, Anti-Piracy, RIAA

It’s incredible to think that Wes only started playing guitar at the age of nineteen, and he had too short a window in his life to share his immense talent with the world. Guitarist Russell Malone eloquently said it’s like he was “selected to come here and just mess up everybody’s head. To shake up the world, and then once they were through, whatever or whoever is controlling, they say ‘well done, that’s enough, let’s go.’ He was a special person.”